Home › Reports › The economics buying and owning a Kit Car

The economics buying and owning a Kit Car

Southern Kit Car guide on the costs of owning a kit car….

The Kit Car spectrum is wide but can be split in general terms into 3 sections, exotic Replicars – such as Ferrari lookalikees, Homage cars – the most recognizable being the Cobra and finally a raft of cars designed around the original Colin Chapman ethos of lightweight simplistic motoring.

For the purposes of this article we’ll concentrate on the latter. The Lotus 7 is the Grand Daddy of open wheeled cars, cars that have cycle wings and where the occupants can see the front suspension and it’s every movement. Caterham as many will know bought the rights to the original ‘7’s and over the years have gone about developing their range and product. A number of manufacturers over the years decided that they could produce a similar concept and the 7’esque kit car industry was born. 7’esque merely referring to that style of car, small, open wheeled, a fun car without frills.

One manufacturer and innovator stands out in this little look at the industry – Sylva Sports Cars, over the years they have designed and produced 7’esque cars and full bodied ( soft top ) such as the Phoenix, Fury, Riot……all of these fall into the Category of drivers cars within a budget, just as the 7’esque cars do. Albeit they can provide a slightly more refined level of comfort – some even have …..doors!

Finally the ‘new kid on the block’ is the exoskeleton type cars, cars where the chassis rails aren’t closed in. In theory far easier and cheaper to assemble, although as these are relatively new to the scene the true second hand market is slightly more difficult to judge. 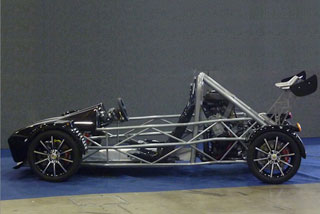 Generically speaking these 3 types of cars make up the bulk of the kit car market, so let’s look at the economics of buying, building and owning one.

Building your own car.

Many get more satisfaction from building than the actual driving and later ownership – ‘Serial Builders’, folks that just like to look back at what they have created. To put together a kit car is no 5 minute job, if driving is equally or more important than the putting it together I’d suggest that you steer clear of building your own. Build times will vary on the simplicity of the kit, time available and skill levels, but with the IVA – (which allows anyone to register for road worthiness a low volume car) you’ll be looking at 12-15mths as an average build to drive time. If you really do like the thought of going this route – one final word of warning: Cost.  Depending on the spec costs can run away, there are many adverts that suggest a car can be built for £x, but many owners will attest to having spent a fair amount more along the way. Everyone can make educated calculations for the larger obvious items – engine, gearbox etc, but what about the cooling hoses, the radiator, the dinky alternator….if in doubt talk to a few folks who have been there and got the T-Shirt.

Well to help you along in that regard we have a few tips here from the Club Forum http://southernkitcars.com/forum/viewtopic.php?f=47&t=4609 . However the one point that we’d suggest that all prospective owners consider is ‘ What am I going to use the car for ‘. There’s a heck of a difference in terms of the spec level for a car that will be used occasionally to ferry the Mrs to the local Pub and one that will be used for touring, regular drive outs or track days. All too often we see well intended but misguided advice suggesting that XYZ car should be left alone or that car B represents a better proposition – without fully understanding what the owner needs. To add to that, consider whether you’re a tinkerer and where your interests in fettling a car may lie – many enjoy this aspect, constantly striving to improve their chariot, others are just interested in experiencing the wind in the hair driving. This will also have an impact on the quality and finish of cars that you view.

OK Finally we hit the nub of the economics of owning and running a kit car !

Good news folks it can be a relatively cheap past time, if , and it’s a big IF you set your stall out correctly. Buy the right car for you and the running costs will surprise you, get it wrong or get a bad case of ‘Upgraditus’ and you can end up throwing as much money as your wallet will allow.

Let’s look at some of the basic costs:

Insurance – a modified car, home built – has to cost a fair bit to insure? Nope, typically a kit will cost on average between £140-200 per annum fully comp. Better still the policies generally don’t rely upon ‘No Claims Bonuses’…and have little effect ( currently ) on your main Policy should you have to claim. The reasoning is simple, the average kit owner drives in reasonable conditions and covers far fewer miles than in a tintop. Clubs such as the Southern Kit Car Club will often have close ties and discounts with Specialist Brokers, shop around before taking out your policy!

Car Tax, – well there’s no getting around this one, unless you’re fortunate to have an age related registration that makes the car exempt….so you’ll be paying the current rate ( approx £210 at the time of writing).

A new set of boots? Tyres as always vary in price according to size, the vast majority of kits run either 13 or 15inch wheels and a good budget tyre will cost no more than £170 a set, and a good all round ‘grippy’ tyre can be had for £350 a set. And being lightweight cars you won’t be needing to change them that often…..in many cases the tyres have ‘gone off’ before wearing out!

Daily Running – how about economy? Urrrgh, are we mentioning MPG in the same context as owning a sportscar? Mmm ok, typically the 4 cylinder carbed cars will see somewhere in the early 20’s whilst injection will give you 30+mpg. Let’s face it these cars are likely to see some heavy right foot action so those numbers are pretty good.

Servicing….Most of the routine work can be done at home, if not a ‘normal’ garage can take care of oil changes, plugs etc…..don’t forget these are standard engines. With Carbs you may need to get them balanced every now and again – whereas with injection you’ll just need to make sure that it’s been set up ( mapped) properly on a rolling road……the routine servicing costs on a kit car is pretty negligible.

The annual costs of keeping a kit, insurance, tax and basic maintenance will be around £500. Not bad at all eh? Read the next paragraph and put a bigger smile on your face…..

All cars lose money don’t they, except for Classics? Not quite. It’s perfectly possible to buy a Kit Car and to run it for a few years with close to zero depreciation, in fact we know of several owners who have actually sold for a few hundred pounds more than they bought it for.

I mentioned at the very start that we’d gear this discussion towards 7’esque type cars, the fact is that the second hand market for kits is quite narrow in terms of price band.

Typically the starting point may be in the £3.5k area typically rising to £9k ( yes there are exceptions )…however its fair to say that the majority of kits of the ilk of: Tiger, Robin Hood, GBS, MK, Fury etc etc will fall into this range. The differentiators being; quality of finish, the make/model, the engine and overall spec of each car. Age has little relevance to the value of the car……a 2004 registered car is unlikely to have any additional worth over a 2002 car UNLESS it has a better spec.

So by buying wisely, it is feasible to own one of these cars and to have an asset that isn’t depreciating, and if it does lose a little value, we’re talking hundreds not thousands. ‘Buying wisely’ doesn’t mean haggling to the nth degree at the outset, it means knowing what you want the car for, and making sure that as much as you can you buy the best spec to suit you. For whilst Kits are cheap to maintain they are generally no cheaper to modify than any other car…..unless you choose to do the work yourself and use second hand parts.

If you like driving and like the idea of raw motoring then take a closer look at the many kit cars that are out there. Find a Club like SKCC and talk to owners, get a better understanding of what will suit you, kits by their very nature are all alike but totally dissimilar – they may look the same, be the same model but each will vary somewhat. And do so knowing that if you buy right the cost of owning one as a hobby will be less than many other mainstream pursuits!