corking run, this morning.
But first a strange one….
i’ve never ever used the snooze feature on my phone alarm , mainly cos i never understand the mentality of the ‘snooze’ and therefore i have no clue how to set it….
so i was a tad surprised to find that i’d missed my alarm call by 5 mins and the phone was ‘snoozed’ – WTF?

Very quick Java intake, almost inhaled as i need fuel before the main run…..got to the meet point to find that Jay must have wet the bed as he was early too. So a more leisurely intake of the black stuff before Bill made a threesome – oh err….and off we set.
Got baulked by a couple of cars early on but once we were on the back roads it was pretty clear, so much so that the run flew by in no time at all. We drew up at the Oasis Cafe ) def one of my Fav’s on the New Romney Road ) and planted ourselves outside in the sunshine. I knew that the Caterham boys were also due to finish their run there and luckily Neil and Mile arrived in short order and we got served and sorted before they rocked up – nice to see some old faces from their crew. 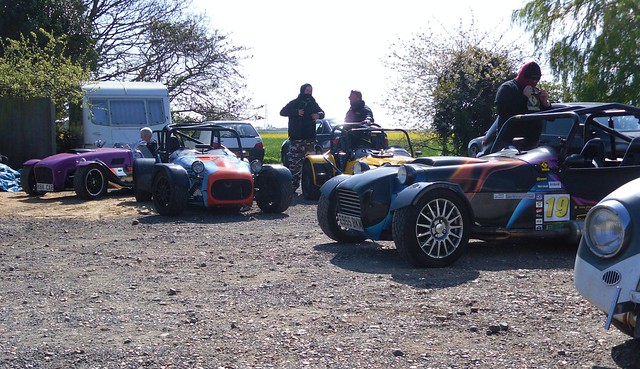 As one does with sun shining and coffee flowing we bantered back and forth, and learnt many a thing, i know know that a metal detector will serve well if you ever go to Mikes house ( prefers burying stuff rather than giving it away ), learnt that Frankie Boyle is apparently ‘ ok’ due to his shock tactics but that most of the others are a waste of space and to be frank am a bit worried about the next time i get erm ‘oral attention’ – because th buggers this morning have tried to link that thought/action to McIntyre – Nooooooooooooo. Bastards.

With some reluctance we headed for home, and found – yep clear roads – whey hey……the road between Appledore and Tenterden is a cracker, especially when its dry, sunny and empty…..

what a tope morning, and cheers Mike for putting the photos up…..l